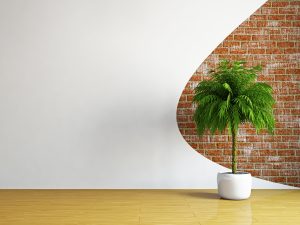 Do plants matter? The cumulative body of evidence from over a decade of research on the people-nature relationship provides an unequivocal answer:contact with vegetation, in a variety of circumstances, is highly beneficial to human health and well being.

Emerging evidence also suggests that in office settings, exposure to plants and views of vegetation reduces stress, restores attentional capacity, and improves performance on a variety of cognitive tasks.

The Effects of Indoor Plants on Health and Discomfort Symptoms

A Norwegian study from 1995-96 provides the best evidence for the health benefits of plants. The research team studied 60 office workers whom each experienced a plant and no plant condition during the spring months.

In the first year of the study, half of the subjects had a planter installed on their window sill and a large floor plant near their desks, while the other subjects experienced their standard office conditions without plants. The plants were grown in a mixture of Leca pears, peat, and compost. They were maintained by a professional service.

In the second year of the study, the conditions were reversed and the plants were moved to the workspaces of the no-plants group. The researchers studied health symptoms using a standardized survey instrument that measured:

The analysis compared symptoms when plants were present and when they were absent. The results showed that:

The researchers suggest that health improvements were likely due to two mechanisms: improved air quality and the psychological value of being in a more pleasing environment. The presence of plants may have created a microclimate effect that resulted in increased moisture (which could influence mucous membrane systems) as well as a cleansing of the chemicals in the air.

Other studies have also found that plants can positively influence air quality, but there is much debate over how many and what types of plants would be required for effective removal of airborne toxins.

For instance, a 1989 study assessed the use of plants to remove formaldehyde and zylene from the air in test chamber studies. This research was prompted by an EPA study that found high levels of these chemicals in newly constructed office buildings in the 1990’s. The chemicals are commonly found in building materials and furnishings.

The researchers found that plants were effective in continuously removing the chemicals from the air in the test chambers. Both the plant leaves and the micro-organisms in the soil contributed to the improved air quality.

A more recent study in 2004, also conducted in a test chamber, found that plants removed airborne doses of benzene within 24 hours. Both the leaves and soil microorganisms proved effective in removal of the chemical from the air. The authors concluded that “the findings demonstrate the capacity of the potted plant microcosm to contribute to cleaner indoor air and to lay the foundation for the development of the plant system as a complementary biofiltration system.”

The Psychological Benefits of Vegetation

The Fjeld et al study in Norway suggests that the benefits of plants are not limited to physical health, but also include psychological well being. This supposition is reinforced by 20 years of research in psychology and public health.

Whether contact with vegetation is active (gardening) or passive (viewing vegetation through a window), results show a consistent pattern of effects that are diminished when plants are absent. Research, summarized in Biophilic Design: The Theory, Science and Practice of Bringing Buildings to Life (Kellert, Heewagen and Mador,2003) shows that people in spaces with vegetation compared to those lacking vegetation are more likely to experience the following outcomes:

For instance, a study by the Heschong Mahone Group conducted in a call center in California found that workers who had a view of outdoor vegetation performed six to seven percent faster on call handling time than those in cubicles with no views or with views of buildings.

Similarly, research by Rachel Kaplan found that office workers who had a view of outdoor vegetation had lower rates of stress than those doing similar in spaces overlooking a parking lot.

An extensive review of the literature, including studies in work environments, can be found in theBiophilic Design book (Kellert, Heerwagen and Mador, 2008).

For more, see these studies:

« Exterior Plants
Three Plants for Cleaner Air in Your Office »